Your mobile number is not registered with us. Please register your mobile no.

Tezpur has many ancient temples that have been in existence in the city since ages. The city is mythological significant. The place has a history that traces back to the time of Lord Krishna. Most of the temples in the city have a strong historic background. The religious places of Tezpur depict the famous battle of Lord Krishna and Banasur.

The religious places in Tezpur include the famous Bhairabi Durga temple and the Shiva temple Ketakeshwar Devalaya. The Mahabhairav Temple is famous for one of the oldest and biggest Shivalingas in the world. Da Parbatia, the historical sculpture temple traces back to the Gupta period of the 600 A.D. 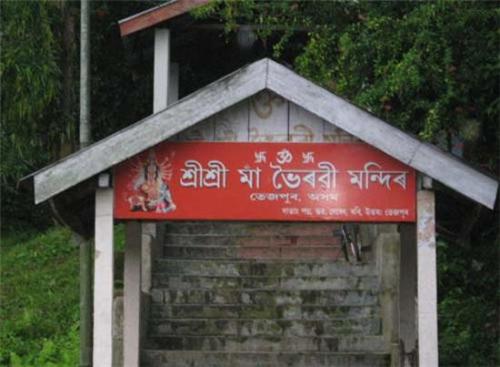 Located on the outskirts of Tezpur, the Bhairabi temple is dedicated to Goddess Durga. Locally, the temple is known as Bhairabi Devalaya and Maithan. It is believed that the daughter of Banasur, Usha regularly visited the temple to worship the goddess.

There is long staircase in the entrance of the temple leading from the main road to the temple doors. The backside of the temple gives a beautiful view of the mighty Brahmaputra along with the Kolia Bhomora Bridge across it. The Bamuni hills are located about few kms away from the temple where one can find the ruins of the palace which dates back to 9th century. The Government through the office of the District Deputy Commissioner manages the temple. Every year Durga Puja is held in the temple.

Another very popular religious spot in Tezpur is the Ketakeshwar Dewal. Lord Shiva is worshipped in the temple.  The temple is a famous religious sightseeing spot of Tezpur. A local committee of Tezpur, manages the temple.

According to the legends, the Shiv Linga was previously in a different place but during a severe earthquake it got uprooted and got placed in the current position. Earlier, the temple was in the middle of bamboo grooves, but later the local committee set up a complete shelter making it a pilgrimage site.
The temple is divided into two parts. The first part consists of the area where the original linga was supposed to have been enshrined, before it got shifted and the second part is the area where the shiva. One of the major festival celebrated in the linga is Shivratri.


The Mahabhairav temple is located atop a small hillock in the historic city of Tezpur. It one of the famous tourist spots in Tezpur. It is believed that the temple was built by the demon king Banasur, and the temple houses one of the oldest and the biggest Shiva Lingas in the world. To read more about Mahabhairav Temple click here.

Da Parbatia is a pilgrimage center and is situated about 6kms from the Tezpur city. It is one of the finest and the oldest sculptures of history.

The main entrance of the is adorned with stone carvings of Goddesses Yamuna and Ganga. The two goddesses stand on either side of the main temple door garlands on their hands. The elegant carvings and timeless architecture dates back to the 5th and 6th centuries A.D. The temple houses some of beautiful and oldest architecture of the Gupta period.

Explore more about Tourism in Tezpur

Are you a Business Owner?

Add the products or services you offer